WITH THE BELLIGERENTS
& WILD HONEY 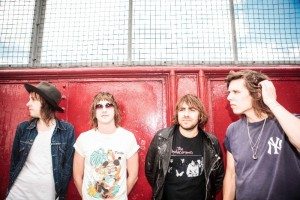 After a monstrous 2015, one of Australia’s most formidable new rock bands, The Delta Riggs are approaching 2016 at warp speed with the Summer in Space Tour, their final live hoorah before zooming off to outer space to start Album #3.

Few of their contemporaries could compete with the year The Delta Riggs have had. Since releasing their latest album ‘Dipz Zebazios’, the band have spent much of their time on the road. Whether it be in a headline capacity, opening for the Foo Fightersthroughout our nations stadiums, or supporting local legends You Am I, and their ownsold out DFTZ album tour, the band have traversed and encountered life forms all over the country probing them with their unique take of no-nonsense, Unidentified Friggin’ rock n’ roll.

‘Dipz Zebazios’ was followed up with the ‘Dipz From The Zong’ mini-album. Released as a special edition 12” filled with various remixes, alternate versions and other curiosities informed but its older brother.

Summer In Space will see The Riggs loading up the spaceship and hitting the highways for a run of shows in regional centres with co-pilots The Belligerents and Sydney-basedWild Honey in tow. Tassie locals The Violet Swells will be stepping up for the Hobart and Launceston shows. The run includes eagerly awaited performances at Port Macquarie’ssold out Festival Of The Sun, and a slot at the triumphant return of Mountain Sounds Festival on the NSW central coast.

Now, having passed the Kessel Run in less than 9 parsecs earlier in the year with a galaxy of sold out shows, The Delta Riggs embark on the Summer In Space tour in their finest form yet. Their riffage is as sharp as knives, their beats set to stun and their flux capacitor is fully operational. 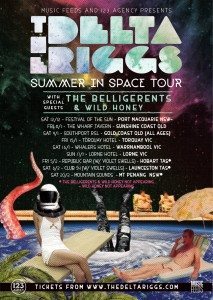