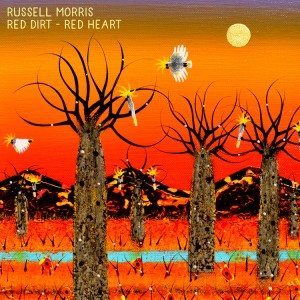 Following on from his critically acclaimed releases; “Sharkmouth” & “Van Diemen’s Land”, Red Dirt – Red Heart tells a story of the Australian interior. Any history of Australia albeit very brief, must include the people who have inhabited this wonderful country for at least 40,000 years. This album goes on to tell the stories of two bushrangers, another about a beautiful town, a song about a loner, a recluse, and an escape artist (Goal that is), a snake and the spectacular Nullabour Desert. We have also included some of our great indigenous heroes in the hope that we can share their stories.

Red Dirt – Red Heart will be released through Chugg Music. “The Chugg organisation is very proud to be releasing Russell’s new album, it is a wonderful conclusion to an amazing trilogy by my great friend”, said Michael Chugg.

The past five years have been an incredible musical journey for both Russell and his fans, fortunate enough to create and release two albums of blues and roots music that pertains to some of the iconic characters, events and moments in our rich tapestry of Australian history.

Every song in this trilogy of Blues albums is a story in itself. Russell Morris has articulated Australian history in a unique collection of recordings  that cuts to the very core fabric of our society. While in recent years he has become a musical historian, over the previous 40 years he earned his own place in Australian music history. “Red Dirt Red Heart’ makes you think, makes you learn, makes you listen and if you like, it may even make you dance as well”. Paul Cashmere The Noise

Red Dirt Red Heart is a beautiful album to finish off a fantastic series of albums.