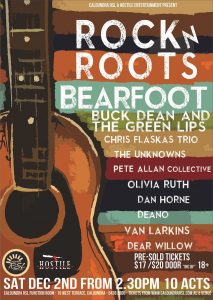 Entering into a new era of Sunshine Coast Entertainment, the Caloundra RSL and Hostile Entertainment are proud to present the inaugural Rock ‘n’ Roots 2017 Event on Saturday 2 December which will grow and become an annual event featuring a massive line-up of national and local touring bands and acts.

Acts playing on the day are Bearfoot, Buck Dean and the Green Lips, Chris Flaskas Trio, The Unknowns, Pete Allan Collective, Olivia Ruth, Dan Horne, Deano, Van Larkins and Dear Willow. This event is a mix of Sunshine Coast rock and roots acts and bands doing great things locally and nationally; and also playing well-known festivals around the country. This event will give these acts a big stage and a purpose-built room to play and help launch this room as there will be some great touring acts playing at this room/Club in the coming year.

“…this is a band who knows their strengths musically and the direction they’re heading in.”

Blending So-Cal, Hip Hop and dub reggae with a dash of the Endless Summer soundtrack thrown in, Bearfoot’s sun-soaked-yet-dark take on roots, reggae & dub has sent ripples through the country, and even over the ditch. You could blame their highly energetic, sweat-drenched live performances, or their ability to create catchy melodies, but whatever the case, Bearfoot has been turning heads wherever they (and/or their music) go. Mixing a solid rhythm section made up of fat bass and steadfast drums with percussive flare, bubbling keys, dub guitars, horn lines that won’t quit, and vocal harmonies to support vocalist Asher Chapman’s passionate rapid-fire vocals, Bearfoot unashamedly bring their own take on Australian Roots/Reggae music. Debut single, Babylon got them noticed, and grabbed the attention of community radio. Impolite produced by Paul Bromley at the Tanuki Lounge in Brisbane’s West End – put them on the map, (Roots ’N’ All on Triple J dug it, being used throughout 2016 as part of the program’s intro), and scored them a Queensland Music Award in the process (Best Blues/Roots Release). Come to 2016, and the era of the Tribe EP was put into effect, including later singles Dreamer and Could Be Worse which kept the ball rolling. When you add all these releases (including two remixes, in a short time, with constant performances and festival appearances, including massive shows at Woodford Folk Festival (2015/16), Caloundra Music Festival (2015/16), Ocean Street World Festival, Big Pineapple Music Festival, Australian Music Week (Sydney) and a showcase at BIGSOUND 16, then it is without a doubt that Bearfoot would be looking forward to their 2017. This year will see the 6-piece head into the studio to begin on new material to follow on from TRIBE, but not before appearances at Luminate Festival (NZ in February), Earth Frequency, Noosa Festival of Surfing, Queensland Ska & Reggae Festival (Headliner) and Big Pineapple Music Festival and this will be all before the middle of the year. Bearfoot stand for a creative culture. Fists in the air, white-knuckle. Voices out loud, no struggle.

Buck Dean and the Green Lips:

“..Crazy name, rocking show. They’re the Sunshine Coast born and bred lads ripping out some classic original rock emerging in 2015, they found their trademark rock sound and stuck to it. Buck Dean and the Green lips have gone from strength to strength over the last two years. The band has enjoyed performing multiple events over the last couple of years including, Mitchell Creek Rock n Blues Fest 2015 and 2016, The Big Pineapple Music Festival 2016 and 2017, Sea & Sound Festival Mooloolaba 2016 and several smaller but just as much fun events/festivals. The band has done multiple amazing sell out shows at their favourite local venue, The Solbar which has seen the band solidify a strong local following. The band has recently completed their third EP with rock royalty, Jeff Lovejoy and have partnered with Firestarter Music for its release in November and an east coast tour for their new single, Mirrors.

“I’ve busted moves to Buck Dean and the Green Lips on numerous rockin’ party nights and have loved watching these lads mutate into one of the Sunny Coast’s most loved party rock machines. Enjoy solid sets; titillating tunes and big arsed beats. Those long-haired surfing guitar gurus are a massive asset for anyone in search of a fully lit line-up”

Roots – funk-rock legends Chris Flaskas Trio bring real live tribal acoustic sounds to the doorstep of your senses sharing a multi-dimensional experience that will touch and invigorate your soul. Chris Flaskas Trio’s trademark sound is a re-imagining they call ‘Earth Rock’ – a high-power blend of alternative, roots, funk, folk, and blues performing Indigenous music utilising native instruments. Through the band’s unique magnetic connection & Chris’s thoughtful, philosophical lyrics and soul-infused instrumentation-ship the Trio has earned the reputation for being a powerful motivating & uplifting act that has wowed and deeply moved audiences. 2017 sees Chris team up with master world percussionist Duncan Barker & Soul bassist Jasper Lambert to bring forth a new vision called – Chris Flaskas Trio. Already supporting blues-rock Legend Ash Grunwald and Wild Marmalade with Paul George from Tijuana Cartel, the boys set their sights higher having secured headlining shows and festivals up and down the East Coast of Australia. Chris Flaskas Trio is infectious in the way they command the stage, their unique sound is instantly earthy with a distinctly Australian rhythm. A true taste of modern tribal funk; this is story-telling at its best. Chris is ready to take his music and his message worldwide!!!

“Chris’s Roots based original compositions are well thought out, inspirational and he as a performer is always able to connect to his audience through song and story”

Brian Goodworth (venue booker for The Solbar in Maroochydore)

“Chris is ultra talented and charismatic with amazing energy and a powerful and unique sound. Music and energy are clearly his gift to the world. He is also an absolute gentleman off the stage. He will go far” Jason John Contos (Frontman of Kallidad)

The first Rock ‘n’ Roots 2017 Event will be memorable and a great evening of local entertainment:

Doors for this event open at 2:30 pm with the first act kicking off at 2:45 pm and the last band finishing up by 11:30 pm. Pre-sold tickets are on sale now and available from the venue by either calling the Club on 07 5438 5800 or in person at 19 West Terrace, Caloundra for $17 pre-sold or $20 at the door on the afternoon/night. Tickets are also available from the acts/bands playing on this event or by going to the below web link: