2016 has been a big year for David Dean and Hostile Entertainment.  I was involved in doing shows on the Sunshine Coast throughout the past year for touring bands Parkway Drive, Frenzal Rhomb, The Black Sorrows, Russell Morris, Mental As Anything, Adam Brand And The Out Laws at the following venues: Lake Kawana Community Centre, The Solbar, the Caloundra Powerboat Club and Tewantin Noosa RSL.

I also helped promote shows at The Helm Bar, Mooloolaba this year for the following bands: Northlane, Dead Letter Circus, Thy Art Is Murder, Unwritten Law and In Hearts Wake. 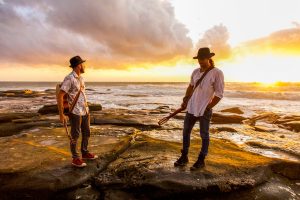 his new EP this year and both Pete and Chris played shows together.  Pete is now playing many shows as a band which has made his sound a lot bigger.  I have seen both of these acts grow and play more shows around the place growing their fan bases which is great to see.  This is what I like to see with local acts that start off and that I can help in some way to get bigger and do more things as well as tour the country and support bigger acts and play at festivals/events.

I have also worked and helped other acts and bands this year including Dear Willow, Mason Hope, Buck Dean And The Green Lips, Mantra, Not To Regret, Darkcell and Holistic.  Hostile Entertainment has some really exciting gigs and events that Not To Regret, Holistic and Darkcell will be playing in 2017, so keep a look out for these.

I worked with Julian Brady from Band Print and Studio 511 throughout July and August this year to put together The Listen CD Sampler with 11 local bands and solo acts on it.  We put this together to put in 1100 show bags at The Bigsound Music Conference and in 100 show bags at the Turn Up Music Conference as well as give them to local media and music industry contacts around the country to help to promote these acts.

I attended The Bigsound Music Conference again in early September this year and met up with many music industry people from around the country and made some really great contacts with new people as well as catching up with old friends in the industry.  I saw so many good and new acts at the showcases at this conference that I had never heard or seen before.  I listened to some great panels and keynote speakers at this conference over the three days and learnt some things to take away and put into my own music business and conference.

The Turn Up Sunshine Coast Music Industry Conference happened for the third year in 2016 at The Lind Theatre, Nambour on Thursday 13 October and it was a great event selling out the venue.  We had three industry panels, three showcase acts as well as a keynote who spoke and played at it.  I would like to take this time to thank everyone that spoke and played at this conference as well as Adam, Katey, Andrea and Eloise who are involved in running this conference with myself.  Also, I would like to thank all our partners and sponsors who help us to make this conference possible to happen.  We have locked in Thursday 19 October 2017 to do the next conference at The Lind Theatre, Nambour again from 4:45 pm until 10:00 pm.  We will be locking in people to speak at it and announcing them in the coming months.  Please check out a short rap up promo video that Howard from Scenestr TV has put together of the 2016 conference to check out what we did.  Please check out the website and facebook pages for Turn Up to find out more about it and what we are doing on the following links:

I have done a lot of gym training this year and have made some good improvements and doing different things for my training and body which makes a big difference.  Thanks to both Tanya and Levi at Anytime Fitness in Nambour for helping me to reach my goals as well as the other trainers and people in the classes that help me.  I really enjoy doing this to keep me fit and my mind sharp.

I went to Melbourne in March this year for Aiden and Bree’s wedding and Aiden’s bucks party which was a big weekend.  It was good to see these two great people get married and for us, their friends, to go to Melbourne and hang out.  While I was down there I did a tour of The MCG with Matt which was so good as I am such a big sports fan and I was so surprised how good this ground was and how much of a big business it is.  I also checked out the old Melbourne Jail which was good to see as well as other things.  We packed a lot into two days while down there.

I went on and organised a surprise buck’s party cruise for Michael Lassman in August for three nights with four other friends which was good to do and a great time.  I also went to Michael and Gemma’s wedding which was on Saturday 27 August at Twin Waters  on the Sunshine Coast.  This was such a good wedding and a great place/time to do it.  I wish you Michael and Gemma, a great life together and it is good to call you both friends.

I went to Bluesfest at Byron Bay with Matt Collins again this year for the five days.  We stayed in accommodation at Ballina and drove to the festival each day.  We saw so many good acts and bands play from Australia and around the world with some really well known ones and up and coming ones that I had never heard of before which is the great thing about this festival.  I am going back to Blues Fest at Easter 2017 for only three days but I am looking forward to it and the time away. 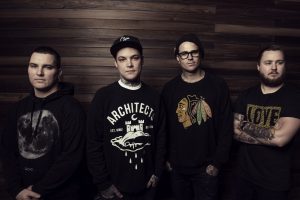 The Amity Affliction on two licenced all ages shows happening on Friday 20 January at The Gympie Civic Centre and Saturday 21 January at Lake Kawana Community Centre, Sunshine Coast.  We are also very involved in The Monsoon RockStock happening on Saturday 4 March at Lake Kawana Community Centre with tickets on sale now.  This event will have 16 bands playing on it from 12:00 pm (Midday) and it is licenced and all ages.  Headliners are Frenzal Rhomb, Regurgitator and King Parrot plus other well known local bands.  Check out the posts on my facebook page to find out where and how to buy tickets to go to see either event and stay in contact on my online websites to see what acts/bands/shows we will have coming up next year.

For now, have a Merry Christmas, happy New Year and keep it live, loud and local – and get out there and see some live music with your friends and family.