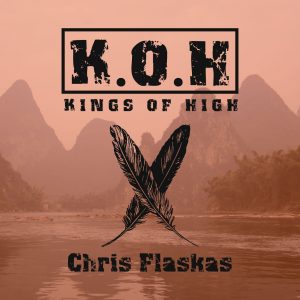 Kings Of High, the latest single for rising Sunshine Coast singer-songwriter Chris Flaskas, is instantly earthy and rich – espousing the artist’s unique voice with an effortlessly catchy, distinctly Australian rhythm. The song gleams with Flaskas’ positivity and belief in self-empowerment. From its passionate lyrics to its title, Kings Of High honours the quest of reaching one’s own potential, and the determination required to do so.

First making waves in 2014 with his beautifully crafted debut album A New Sun, Chris Flaskas has risen to prominence over the past couple of years, wowing audiences with his electrifying live performances. Wielding an arsenal of instruments, Chris’ trademark sound is a re-imagining that he calls ‘Earth Rock’ – a high-power blend of alternative, roots and Indigenous music. Through his thoughtful, philosophical lyrics, Chris has earned the reputation of an intellectual artist imparting spiritual knowledge… a modern thinker with a tribal soul.

Following on from his award-winning 2015 When The Gold Is Gone EP, Kings Of High is Chris Flaskas with all guns blazing… a song you can dance to, sing along with, and just lose yourself to. The power of Chris’ live sound has been captured perfectly on the single, which was recorded at Helipad Studios, situated on a mountain in the Queensland rainforest overlooking the Pacific Ocean. Every inch of that beauty, every breath of that air, has gone into Kings Of High and its tribute to the millions of creative souls ever-seeking higher perspective.

The release of Kings Of High starts a new chapter for Chris Flaskas – bringing with it the call of the road. Having earned his place on key festivals such as Ocean Street World, Caloundra Music, Peregian Originals and Maroochydore Music & Visual Arts, along with supporting living legends The Black Sorrows, Chris is ready to take his music and his message worldwide. 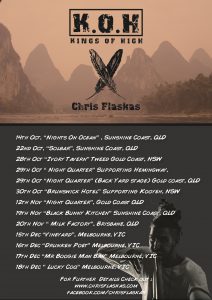